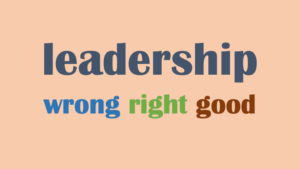 “Ethical leaders do the right thing at all times—not just when it is convenient or someone is watching—and they hold their employees to that same standard.”

What’s wrong with this sentence? And what is possibly right? (Read on for one answer.)

Both as a researcher and a teacher, I use the internet to search not only for research articles or teaching material, but for things people say about the issue I am researching or teaching in a more ordinary context. Reading up on what people, in this case, say about ethical leadership, as well as who is talking about it and how, can offer helpful contrasts and support for positions taken in more academic contexts. Of course, I have no illusion that my search results will give me a complete picture of all the things people say. As a moral philosopher, however, it is mostly enough to consider what someone could say to then get on to what is most important. That is, to work out what I want to say, and take responsibility for thinking, about the issue, given all those things people have said and might indeed come to say about it.

Searching the internet for what people say is often instructive. Sometimes it is amusing. (Try throwing in an ethically challenging question or catchphrase and see what you get.) Other times it is surprising, even bewildering. People say things you just couldn’t come up with on your own. When I encountered the sentence above, my response leaned towards the startled. The first part of the sentence “Ethical leaders do the right thing at all times” is definitely not anything I as a teacher in ethics would say. In fact, I would claim it is almost unethical. I would be surprised to find support for it in any of the main ethical theories, and here all theories seem to get it right.

The nested clause “not just when it is convenient or someone is watching” gives some guidance to what the author thought when writing it. To be good it is not enough if I only do good things when it serves me. If I am to be good, it has to pervade my whole being. I should not do good to look good to others. I should do good, because, well, it’s good.

So much seems right.

What seems wrong is the emphasis that an ethical leader does “the right thing at all times.” Surely it is “good” to do what’s right. Then it might seem “better” to do what’s right most of the times? And clearly “the best” thing is to “do the right thing at all times”? This seems to be the chain of reasoning leading up to the claim. Perhaps a radical take on just how good an ethical leader should be. (This impression is strengthened by the suggestion that an ethical leader should “establish zero tolerance for ethical violations”.)

The problem is that it is extremely difficult, or better yet impossible, to “do the right thing at all times”. This is one of the first lessons students usually take in a course on moral philosophy. Part of this problem has to do with judging what an “ethical violation” is. A first delineation suggested by the text is acting against one’s ethical code of conduct. But a code of conduct can specify both what is wrong for someone to do (e.g. discriminating against someone), and what is right for someone to do (e.g. striving towards a respectful work atmosphere). So, if I promote zero tolerance to ethical violation, I should at least specify whether it is as serious a violation to do something I should not do, as it is to omit to do something I should do. Is it as bad if I “at all times” do not attempt to work towards a more respectful work atmosphere, as if I actively discriminate against someone?

Another problem is related to possible conflicts within the code of conduct. What if I do not do one of the things the ethical code deem right (”being respectful”), because I try to attain some other value it promotes? (Say, ”being honest”.)  Failing to do what is right is therefore not always doing something wrong. I may also need to decide ”what is more right”. And even if I really try not to do wrong, I might still do so unintentionally. Discrimination often has this feature. It may turn out that I as a leader unwittingly discriminated against someone by not promoting them, because I was only thinking my actions served to promote the career of someone else who also deserved promotion. I didn’t even consider I was doing something wrong, because I was all intent on doing something right.

The most troubling part with thinking that being a good leader means doing “the right thing at all times”, however, is that ethics, when it is really radical, does not consist in following a code of conduct. ”Being good” is not just a matter of ”doing what is right”, or ”avoiding to do what is wrong”. It is being open to the possibility that our relations to others may and sometimes should lead us to reconsider what we think of as wrong and right. If I hurt someone unintentionally, it is not a good response to defend myself by saying that I behaved correctly all the way through; “I was only following the code of conduct!” That may be true, but if I want to act responsibly, I should rather ask for forgiveness. I should also check whether there is something in the code of conduct, or in my relation to it, that needs to be changed. For some wrongs are committed precisely when we become too eager to stick to a code of conduct ”at all times”.