Sci-fi summer continues. This whole madness got started when I raided my dad’s old collection of sci-fi from the 60’s and 70’s and I’ve been at it again. Since I try to look for political Sci-fi I chose the four books by Aldiss I could find, since he was maybe the most important name in the ”new wave” sci-fi in the sixites (along with e.g. Moorcock), known for a more left leaning style than more traditional Heinlein type sci-fi. Being the scholarly type I read them in chronological order which proved, as we tend to put it, fruitful.

This early short text is not the deepest of stories I have read. Its essentially an action story that seems to have been written in order to be turned into a screenplay (it hasn’t). Think James Bond with aliens. The hero gets out of all types of trouble by being damned clever, except he does not get the ”big picture” which then gradually unfolds. A typical Aldiss theme of imperial oppression does surface already here – Aldiss had some experience of the way the British treated subject people in India and Indonesia. And he has one solid socialist point – the poor, be they human or aliens, have nothing to win by being loyal to their ”race”. Proletarians of the universe, Unite! 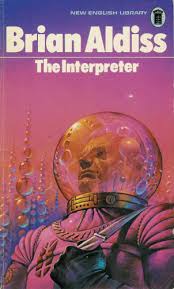 The theme of empire moves to centre stage in this one. Think 1984 with aliens. No, this one is pretty good. Earth, far in the future is colonized by a superior alien race who have built an empire consisting of about four million worlds. Clearly an insignificant planet like earth is not their biggest concern, but one senior chancellor in the empire hierarchy by whim decides to investigate the situation after a report of excessive exploitation by the local authorities. This investigation becomes a chance for the resistance movement on earth to act and somehow overthrow the local tyrant. The main character is a human Interpretor who is uniquely placed to be able to act. Fun, but, ultimately 1984 is much better.

Think Frankenstein with… no, no aliens in this one. But it does revolve around Frankenstein and his monster. As a result of extensive use of thermo-nuclear weapons the time-space structure of the world has become unstable and ”time slips” start to appear, where a place or a person is thrown back in time. This happens to main character Joseph Bodenland who is thrown back to 1816 Geneva. There he encounters both Percy Shelley, Lord Byron and, of course Mary Shelley, the author of Frankentein; and Doctor Frankenstein and his monster. Bodenland obviously assumes that Mary Shelley in fact describes actual events in her book – since he witnesses some of them himself, but the book actually leaves this open, there is an interesting argument where the narrator muses on the possibility of parallel realities, and that events and persons that are fiction in one reality might be real in another. Another fun thing was the way I reacted when Bodenland starts to tell Mary about her future. As any experienced time traveller knows this is exactly what you must not do, you will create all kinds of paradoxes and upsets in the time continiuum! Religion plays an interesting role in this one.  All the characters from 1816 are militant atheist who believe that science will replace religion in the future. Bodenland, however, is in the beginning of the book ”uninterested” in religious questions, but has some kind of conversion experience when he grasps what Frankenstein has done – he suddenly sees Frankenstein’s work as blasphemy, and this, more than usual science-will-destroy-us is what drives him to try to stop Frankenstein and his monster.

This is an ambitious novel, and Aldiss does seem to bite off a bit more than he can chew. The narrator and main character apparently undergoes some kind of personality transformation as a result of falling through the time slip. This we are repeatedly told, but I at least did not get any idea wherein that transformation consists.

The book was made into a rather crappy movie in 1990 (don’t let the impressive cast fool you, it is stupid), where all the interesting parts are left out and a lot of gore and violence (and really cheap looking special effects) are added.

Now, this is one of the weirdest novels I have read. It builds on the same kind of scenario as Frankenstein Unbound i.e. time slips as a result of nuclear war. But this story in infintely more complex. There are I think five or six parallel stories with different character that only in the very end are connected to each other (think about that, I guess about ten main characters equally important, and you have to read six or seven chapters to find out what happened when the last chapter ended).It is written as a kind of musical comedy, I kid you not, the character repeatedly break out in song! Since time is acting up, there is no simple way to tell the story (like chronological order) so it does get confusing at times.The theme of the book could be said to be a kind of mystery that asks who actually rules the world. It seems that the world is run by computers (the Zeitgeist people should read this), but who runs the computers?

It is also at times almost Hitchhikers guide to the galaxy-level silly, though not as funny IMO. And incredibly thought provoking as well. Aldiss in all his books is fond of alluding to different works of literature etc, but here it at times get absurd (I guess it is because the narrator is far from a neutral observer): I found a joke that you would only get if you are fairly well versed in liturgical terminology. On that point there seems to be a development here, whereas the earliest two contained many remarks on religion that where fairly typical of many sci-fi writers (in the future religion will disappear and be a sign of how backward humanity used to be) here he often alludes to Christian terminology in a way that suggests he knows what he is talking about.

It does kind of come together in the end, but at times it does feel like a bit too much. So again, high marks for ambition, slightly less so for execution. But it is well worth the read.

Now I’ll finish of the Dune Saga, than I have ordered one more book by Aldiss, the Helliconia trilogy, which does seem very interesting, and if he continued to develop as a writer after these four, should be very good indeed.