Stanley Hauerwas: In Good Company. The Church as Polis. 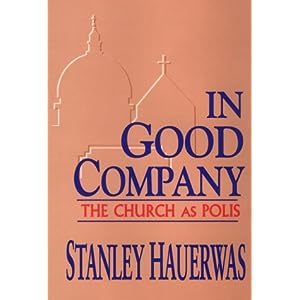 This book collects again 13 essays (and an important introduction), most of which deal with the theme Church. In Hannah’s Child (which is perhaps the most important source for Hauerwas’s ecclesiology) he writes:

In Good Company was an attempt to express the ways in which my work has developed in response to people who have claimed me as a friend, people like Jon, and Kyle, and Peter. But it was also an attempt to make some sense of my ecclesial homelessness. Clearly one of the reasons I have so many people in my life is that I do not have an ecclesial home. Instead I have friends in diverse ecclesial homes. That is one of the ways I live out being homeless, but I also resist homelessness by trying to be at home in a particular congregation.

The texts are groups under three headings: I Protestant Company, In Catholic Company and Ecclesial Ethics. The first two parts thus shed some light on both Hauerwas’s protestant (including mennonite) influnces and Catholic influnces.

The last part has some texts that at least for me stand out. In one article Hauerwas’s discusses how he teaches ethics based on liturgy, the approach that is the founding principle in The Blackwell Companion to Christian Ethics. I find that chapter extremely useful when thinking about my own teaching. The other text is important because it provides a Hauerwasian treatement on a perhaps un-Hauerwasian theme, vegetarianism. It is co-written with John Berkman, and is probably the best theological argument for vegetarianism out there (Although it has not to my knowledge convinced Hauerwas.)