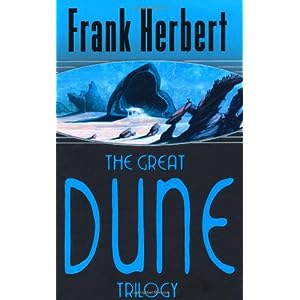 So, apparently this Sci-Fi summer, although I’m getting a bit bored already.

is of course a real sci-fi classic, and deservedly so. The story itself is not the greatest aspect of these books, at least for me the interesting part is the role religion and politics, and to a degree, ecology plays in Herbert’s universe. Politically, it is a treatment of non-democratic ways of rule that is neither demonizing nor glorifying, and therefore illuminating.

The religion-part is kind of complicated, because by and large the text works with a double approach, with the elite basically using religion in a completely cynical and pragmatical way (that, most of the main characters) while the ”masses” actually believe its true. The idea that with time all religions converge is slightly irritation, an outdated theory IMO. But there are some hints of a more sofisticated approach too, where religious and non-religious views of the universe are placed side by side on more equal terms. But mostly there is a clear secular bias. The actual religions portrayed, a mix of Christianity, Islam and Buddhism is interesting, because symptomatically it is fairly clear that while Islam and Buddhism contributes a lot of ”wisdom” and flavour, it is Christianity that brings the structure to the whole thing, particularly the messianic structure (a very Christian type of messianism, I think). Of course, only scholars of comparative religion get exited by finding ”messiah type character” in popular fiction, but here the theme is very explicit – the second book is called ”Dune Messiah”.

An odd feature of the books is that you get to know the ”thoughts” of all characters in the story, that is Herbert does not chose one or two persons’ perspecective to tell the story. In spite of this, or maybe because of it, all characters mostly feel a bit distant, and thus a bit shallow at times, although some characters develop in very interesting ways.

The first and third book are the best, I think, the last one interesting enough for me to want to read the remaining parts. They seem to be out of print though, so I will see. Next: Ursula K LeGuin: Feminism in space!