Indigenous Peoples and Climate Change in Latin America and the Caribbean 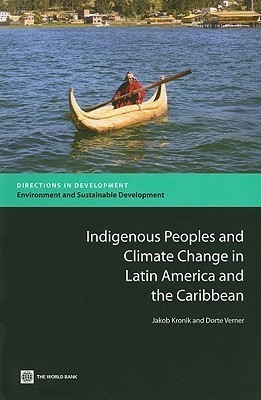 by Jakob Kronik and Dorte Verner

Jakob Kronik’s and Dorte Verner discuss in their book Indigenous Peoples and Climate Change in Latin America and the Caribbean the social implications of climate change and climatic variability on indigenous peoples and communities living in the highlands, lowlands, and coastal areas of Latin America and the Caribbean (LAC). Their book is based on field research among indigenous communities in three major eco-geographical regions: the Amazon; the Andes and Sub-Andes; and the Caribbean and Mesoamerica. Jakob’s and Dorte’s book aims to increase understanding on the complexity of how indigenous communities are impacted by climate change and the options for improving their resilience and adaptability to these phenomena. The goal is hence to improve indigenous peoples’ rights and opportunities in climate change adaptation and guide efforts to design effective and sustainable adaptation initiatives.

The book highlights that indigenous people in LAC are a diverse group, which consists of approximately 40 million people with more than 600 different ethno-linguistic groups. Although several indigenous cultures survive in urban settings, Jakob’s and Dorte’s book focuses on rural indigenous populations. These groups of people are already fragile due to a multitude of factors, and they depend strongly on natural resources for their livelihood. This includes fishing, hunting, and livestock herding, which all are affected by climate change. Climate change also contributes to making their ecosystem fragile and threatened. What makes these communities additionally vulnerable is their comparatively limited access to infrastructure, services, and political representation.

The book is divided into geographical sections, such as Indigenous people of the Amazon, Andes, Caribbean and Central America. Each section discusses the threats of climate change to the community, the potential and indirect effect it has on the community and ways the community have adapted to climate change. Some of these threats that are affecting indigenous communities include temperatures raising, river levels rising, drought and fires which all affect their flora, fauna, horticulture and health.

The book also concludes with recommendations on how to combat climate change based on unique indigenous knowledge, such as maintaining the balance between humans, nature and the cosmological realms and relying on indigenous peoples’ management of biodiversity and also allowing them to be in charge of its protection and caring. The authors also highlight the need for a dialogue between authorities or public institutions and indigenous groups, since these institutions have the power to make vital policies and strategies to achieve sustainable solutions in preserving indigenous culture, beliefs, knowledge, lifestyles, etc.

Jakob Kronik has a doctoral in Social Sciences and is an analysis of climate and environmental change and adaptation issues, including rural development planning and monitoring, agricultural sector programs and
with mainstreaming of environmental concerns into national planning and policy advice. He also has 20 years of professional experience as a socio-technological planner with natural resources, indigenous peoples, environmental change and rural development issues in developing countries with bi- and multilateral organizations, governments (including the European Union), NGOs and CSOs. He has extensive experience in governance, institutional development, sustainable development, climate change,
biodiversity, community-based land and forest management.

Dorte Verner is an awarded photographer, who focuses on people that have little voice and never make the news. Her work centres on environmental portraits, with images inspired by the life and livelihood of people living in extreme situations and in remote geographical locations. These include rural areas in Africa, the Arabian Deserts, Latin America and the Amazon, where the people living in these areas are affected by climate change, globalization, conflict, and other changes, to which they have contributed little to.