In honour of the International Albinism Awareness Day, on June 13th, we want to share one of Lekeaka Mabel’s blog posts. Lekeaka Mabel wrote three blog posts, which are all part of her master’s thesis called “Albinism in Cameroon: How persons living with albinism experience social exclusion in Cameroon”. Her other blog posts and the rest of her thesis can be found here.

When White Looking is viewed as a curse.

Whiteness is the centre of the world[1]. Although Cameroon is a black-dominated country, proximity to white gives one more advantages. For example in some tribes like the Bamileke in the western province, fairer (whiter) women fetch a higher bride price than darker women. Skin lightening products are very popular as people constantly seek fairer skin tone so as to attract the advantages associated with being white. However, there exist some groups of Cameroonians who were born “white”. One would think that they would be hailed as kings and queens and showered with love and admiration. On the contrary, they are shunned, despised and even hunted. Herein lies the contradiction that is the life of people with albinism in Cameroon.

Albinism is a word derived from the Latin albus, meaning white. It’s a genetically inherited condition where a shortage of melanin pigment affects the eyes, hair and skin[2]. This condition affects the body’s production of melanin, reducing or eliminating pigmentation in the skin, eyes, and hair. This melanin deficiency causes complex visual impairment, altering retinal development and nerve connections to the eye[3]. It also weakens natural defenses against sun damage, placing people with albinism at heightened risk of skin cancer, especially in hot countries. The difference in skin creates adaptation and socialisation problems, with many myths and misconceptions surrounding PWA that have spread over the years within many African communities.

In Cameroon likewise other African countries, people living with albinism are given stereotype names, subjected to stigma and prejudice because there are prevailing myths and superstitious beliefs about them not being humans.

Testimony by my friend Melissa Longla……..VOICES OF ALBINOS 2 – YouTube[4] Melissa Longla in her interview on YouTube says human relations as an albino have been pretty difficult…….

“People make fun of your person. Some think you’re a curse or product of adultery and all sorts of negative things you can think of. Children chant derogatory songs while you walk past the streets and people wouldn’t eat food touched by you…. You have to survive amidst all these,” she explains.

One incident which particularly hurt Melissa was back in secondary school when her classmate refused to eat just because she was the one who shared the food at the refectory. “This really weighed down on me,” she laments.

“Another incidence was when a boy in my class (form 1) cried all day because he was made to share a desk with me!” Apart from these, Melissa says she has been severally turned down by job officers because employers think people like her cannot fully deliver at work. 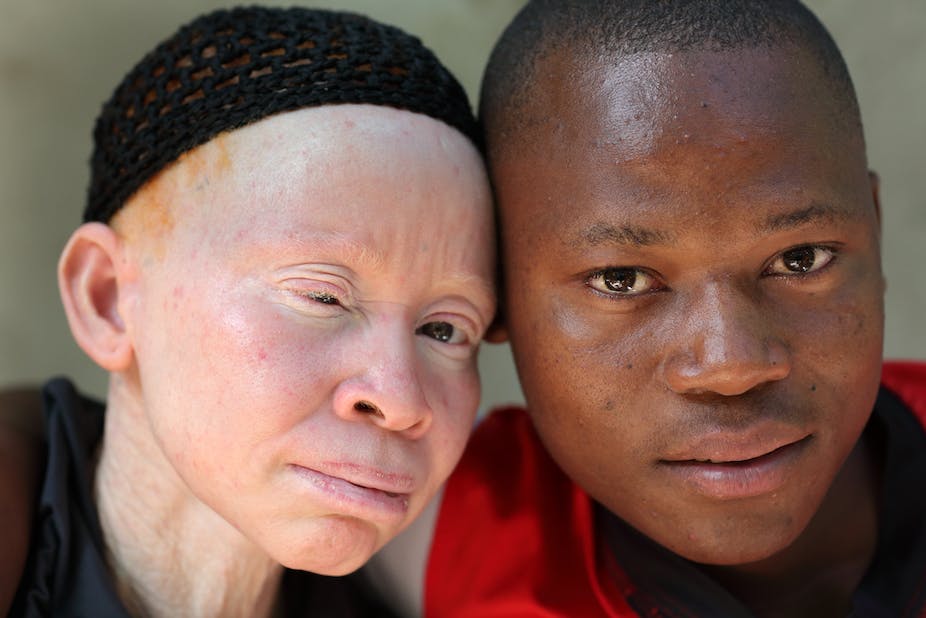 Parents especially mothers of people living with albinism face stigma from the family as well as on a community level. Many women have been sent out of their marriages because their husbands could not understand why two black people could give birth to white skin baby.

[5] Picture of Melissa and I