Today, we had our first lecture of the master’s programme for this academic session. The course titled ‘Key Approaches’ analyses the foundational elements and frameworks through which the concept of social exclusion can be engaged. The lecture was hybrid but most of the students were in class interacting face-to-face. They introduced themselves to each other and had brief moments of discussion about their identities.
Some key issues discussed during the lecture centered around ‘Power’ as a core element of discussions in social exclusion. The concept of power was introduced to the students through storytelling, which I think was impressive because personally, I never knew I had power that could be used differently in several contexts. More so, the students pointed out the fact that the words domination, dominant narratives, accountability to name but a few came to mind upon hearing the word – Power.
Following was a problematization of the word power which led to a series of discussions about power relations and struggle in Finland and some other regions of the world. Further, the lecture aimed at inspiring the students to think about their ‘power’ in relation to ‘who’ they decide to be (identity) in discussions of exclusion. Some questions they had to consider are as follows: 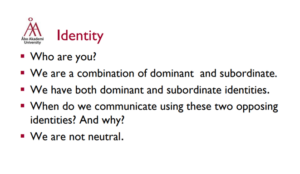 By ‘who’, the lecturer discussed about the possibility of identifying solely or in a hybrid manner, as an oppressor or oppressed, white or black, male or female and so on. The lecturer for example, being a Black, African, Male by identity, and lecturing in an institution built with a western-style education, explained how his passion for studies on Racism and Racialization informed his power to critique some hegemonic structures of racism in western society. Finally, the lecture was geared on explaining how methodological studies in social exclusion can be approached both a process and an outcome. An interesting aspect of this two-sided character of studies in social exclusion is
that the end-product of both the process and outcome is ‘social exclusion’.

Personally, I thought that was a stunning conclusion that made me wonder how students frame the larger outcomes or objectives of their studies in social exclusion. On a personal level, the process/outcome dichotomy stirred me in rethinking upon the windows through which I engage the concept of social exclusion in my own research and to consider the larger outcome of the methodologies I employ in studying the concept.